At December 22 I finished the International Triangle Programme by completing my last exam. I went back by plane to the Netherlands the next day and an elderly French lady was sitting next to me. While listening to her complaining about all the food she received (apparently something was wrong with everything), I drifted away in deep thoughts about the past few months. I started musing about the university, about the trips I have made and about the friends I was leaving behind. I figured that studying abroad is like a paradox; you build up your life as good as possible while you know that at one point you get to leave it all behind again. Precisely this makes such an experience very valuable; you know that there is little time available and therefore you push yourself to make the most out of this unique opportunity.

With this idea in mind I spent my time in Montréal. My girlfriend planned to visit me for four weeks in November and I had no intention at all to do anything related to work or university whatsoever, of course. Therefore I started preparing everything I could do in advance, in September and October. Admittedly, writing papers in evenings, studying in weekends and pre-working at the hospital at days off was a bit much, but it was definitely an effort well worth it. 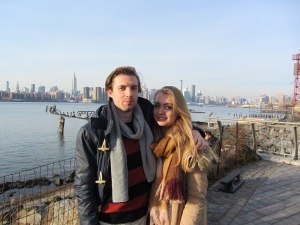 At Williamsburg, Brooklyn, looking over Manhattan

We spent November sightseeing in Montréal, Toronto and New York. We did a lot; we drove through the first snowstorm of the year, experienced the magnificent view over Manhattan from Williamsburg, Brooklyn, while eating bagels with bacon, cream cheese and lettuce, walked through the typical Kensington market in Toronto, and saw many more things. It’s funny that the U.S. border guards are really those typical suspicious Americans whose sole purpose seems to be making your life miserable. After spending about thirty minutes inside the border control place, and paying tourist fees, we were finally cleared to come into the land of the free and see the big apple.

I have to admit that for me, Toronto and New York are much more impressive than Montréal. Those cities do not have the European touch that Montréal has. Skyscrapers are all over and the cities are more massive. Montréal is big as well but in a different way. Only the center has some tall buildings but in general life seems a bit less ‘busy’ than in Toronto or New York. Nice thing about Toronto is that the center is very big but still walkable. There are typical areas that are very beautiful to go to. The Niagara falls are very close by: just two hours driving. It’s funny that the Niagara falls are at the edge of center of Niagara, which is locally called the ‘Vegas of Canada’. We spent some time walking around in there but it is way too commercial and does not suit with such beautiful nature right next door. The pictures here give an impression of this contradictory world: Frankenstein’s monster eating his burger v.s. beautiful Niagara falls right next to each other.

Of course, travelling around was still difficult to combine with the university work even though I prepared everything I could on forehand. This is because November is a crucial month in the semester: courses are finalized, exams need to be prepared, presentations to be given and reports to be completed. What for me really characterizes HEC is the emphasis on participation, writing papers and working together. This was perfect for me and Max, fellow Triangle student, because we did everything together. Whenever either one of us did not have time to finish something, the other one helped out.

Thinking about the courses, I can’t say that it is a huge workload compared to what we are used to in Maastricht. I would say that it’s kind of the same although in Maastricht the courses are seven weeks long whereas the courses at HEC are about twelve weeks long. At HEC, courses might be a bit more linked to practice through work visits and guest speakers.

Also, as I already mentioned in my previous blog post, HEC creates a great learning atmosphere. Cohesion among students is emphasized which is great since I got to meet, and work together with, many other bright students. A good example of HEC encouraging students doing things together outside the classroom as well is that the different master programs have a budget allocated to spend on e.g. dinners. I went to have dinner together with other students of the master in supply chain management. We went to a sushi restaurant with around thirty persons paid for by the university. There is a funny peculiarity I’d like to address about this dinner: We had to bring our own drinks. In a restaurant! Apparently, as alcohol licences are so expensive for restaurants in Montréal, many of them choose not to have one. This leads, at this dinner, to over thirty bottles of wine on the table. After I read this on the french invitation I could not believe it. I started asking friends who were joining whether I misinterpreted the Google translated version of the invitation (still not a master of the french language!), but to my surprise they mentioned that it’s quite common that this happens! Back home I can’t imagine this, bringing your own alcohol would never be allowed I think. 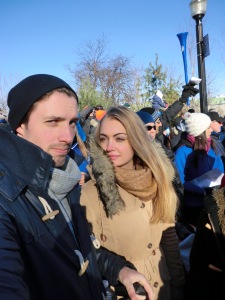 My Girfriend and I on our way to watch a football match in -10 celcius. It took a staggering 3.5 hours!

December was mainly characterized by exams. I had one in November and the other three where spread out over December, ranging from the 11th until the 22th. In between were the typical goodbye parties of friends who either left Montréal for Christmas or left Montréal for longer as they were exchange students. During this month, the city was fully covered by a white coat. I remember that ever since the first snowstorm arrived at Montréal, the temperature dropped between -5 and -10 on average every day and the snow never left. It became undoable to go out of the house without some winter preparation. one morning I stepped in a puddle of snowy water and my shoes almost fully disappeared in it. As they quickly filled up with water I realized: December will be a hell with those. Needless to say I got myself some new ones! I will miss the friends I have made here but I’m certainly glad to come home again to a warmer climate ;).

Looking back I think I can say that Max and I both succeeded here in Montréal. We ended up having a good learning experience, both through work and university. We learned to work together with people from different cultures and also accept new ways of working, although sometimes this was quite a challenge. Besides doing our work we got to see more of Canada and the U.S. and enjoyed our semester abroad a lot. I have made some good friends for which I am very grateful. As both our GPA’s for this semester will end up around an ‘A’ (we already know most of our grades), we can look back at a successful stay. I feel more experienced, but miss the life in the Netherlands, my girlfriend, family and friends. This has been a great experience but I also consider myself very lucky to be able to spend the holidays with beloved ones back home.

Pondering about these things in the plane I came to the conclusion that it’s very valuable to spend time abroad but it is also good to come back. Thank you for reading and commenting on my posts, I hope that you enjoyed them as much as I did writing them :). 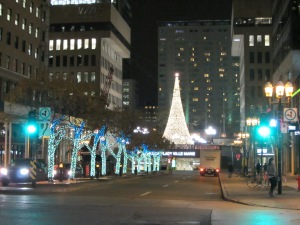